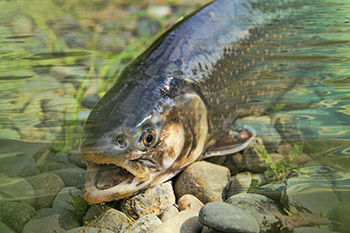 Fisheries management is a year-round process of information sharing and policy development on an international, national, regional and tribal level.

Ever since the original United States vs Washington decision of 1974, a case which has been continually refined with subproceedings since such time, Quileute and other treaty tribes of Western Washington have been recognized as co-managers of the fishery resource with the state. Quileute Natural Resources’ role in the management process includes intensive data collection in the field, followed by interagency negotiation on how to use that data to express the best harvest numbers for the forthcoming year, for each species. The data, complex math models, and negotiations among all players, ensure all treaty rights are being honored when forming management packages for salmon species, halibut and other ground fish, and crabs.These management packages include fishing schedules, gear policies and harvest allocations among the US and Canada , the tribes and the non-tribal fishers, and among the tribes themselves. Different regulations are set for commercial, subsistence, and ceremonial fishing.

For salmon, the management process starts at an international level (Pacific Salmon Commission, including the United States, Canada, and the treaty tribes) and then moves to a domestic one known as the North of Falcon process, which originated to assure Pacific Coast rivers manage their salmon river by river and run by run, and not just by species along the whole coast. It is on the river scale that problems with a salmon run’s return figures (spawning, habitat issues) can arise.Once a management package is devised with all parties giving input, it goes before the National Oceanic and Atmospheric Administration for final approval.

The management processes for ground fish and crab are different.For halibut, it remains strictly at an international level with the International Pacific Halibut Commission regulating harvest amounts.For ground fish such as black cod and tuna, management is through the Pacific Fisheries Management Council, which regulates fishing off the coasts of California , Oregon and Washington .For crab, it is solely a state and tribal management process, handled annually by agreement and following a protocol established under United States vs. Washington.

One important subsistence fishery is the harvest of clams along the Pacific Coast . The reservation ( First Beach ) is not a hospitable environment for them, but the beaches in the Usual and Accustomed Area are. These beaches lie within Olympic National Park, so a commercial fishery is not possible. However, under their treaty rights the tribal members often harvest razor clam, butter clams, California mussels, and other invertebrates for subsistence and ceremonial purposes. These beaches are susceptible to seasonal algal blooms, which don’t harm the shellfish but are toxic to people, depending on the concentration. So for about 10 years now the tribe has collected the clam species and sent them to Washington Department of Health for analysis. The results are published on WDFW’s website. In addition, the Quileute have a 24-hour hotline, (360) 374-5636, which gives the latest shellfish safety reports. While clam harvests are not forbidden by regulation when the levels are “hot”, we urge people not to consume them during this time period. (See also our web page, under “Shellfish Hotline” in the menu to the left.)

For the river fishery, in addition to management of salmon allocation, the staff participates in a number of forums related to stream habitat and timber harvests. Meetings with agencies such as the US Forest Service, Washington Department of Natural Resources, and the Salmon Funding Recovery Board entities (lead entities under a state statute) are some examples. The Quileute enhance diminished salmon stocks through their own Lonesome Creek Hatchery in La Push, and share operations of the Bogachiel and Sol Duc Hatchery with the state. The staff writes a number of grants for salmon habitat restoration, water quality monitoring, or hatchery genetic studies.

Keeping the marina open is an annual challenge because of the heavy sediment load carried by the Quillayute River and its four tributaries. The staff works with the tribal council and with federal and state agencies to provide data, prepare permits, and overall, assure dredging can continue and the marina can remain operating for fishers and the US Coast Guard.

Our location away from urban development is a factor in our relatively abundant river fish, compared to other parts of Western Washington .The staff works to have the greatest access for tribal fishers possible, under shared resource conditions upstream of the reservation. For example, there is only one two-week period out of the year that the river is closed under our regulations. This is to allow a small percentage of spawning adult steelhead (known as kilt) to return to the ocean. Unlike coho, sockeye, Chinook, and other salmon, not all steelhead die upon spawning. Some ten percent may repeat the river-ocean-river cycle. So fishing on the Quillayute River is usually suspended in early spring to allow kiltto safely migrate out of the river. Our salmon/steelhead river fishery schedule provides for this period, which is usually weeks 14 and 15 of a schedule running from April through August.

Fishing is not just a source of income and subsistence to the tribe. It is an integral part of the native culture. Ceremonial fish are a vital part of tribal potlatches and other events. Tribal youth are taught from an early age how to engage in both river and marine fisheries. While the boats and gear are not the same as in 1855, the treaty times are remembered and honored in the annual paddles to various native locations in Washington , a major event for the Quileute and other treaty tribes with coastal villages.

Within Quileute Natural Resources, the director and fisheries biologists will at various times provide input in data development and negotiations. Rulemaking is developed among these persons and presented to the elected Quileute Natural Resources Committee, and then to the Tribal Council, except for seasonal regulations. The Committee consists of 7 elected members (see QNR Committee and Policy on the menu to the left for current members). These are open meetings and any tribal member is welcome to attend and provide input.

In addition to determining harvest allocation, the staff works on a number of interagency policy issues. For example, recently Quileute and other Pacific Coast treaty tribes, with the state of Washington , created an Interagency Policy Council to directly discuss with the Olympic Coast National Marine Sanctuary issues impacting tribal resources within Sanctuary boundaries. Previously discussions had been diluted among interested parties who had no management role.This new body provides a focused forum of just managers to deal with the fisheries issues in that location.

Other major policy issues concern the rapid decline of marine fish and shellfish species, world-wide, and the need to create conservation programs that do not unfairly impact tribes. United States vs. Washington has limited tribal treaty fishing to particular geographic areas on the coast, while non-tribal fishers can access the entire coastline within US jurisdiction. Tribes are ever vigilant to be sure government planning for fish conservation will allow them to fish for their livelihood, and work within programs such as Pacific Fisheries Management Council to design programs that will not shut them down, while allowing non-treaty fishers to continue to harvest without limits. This issue is complex and will take years of data collection, analysis, and negotiation.